A dose of Christmas reality

Last night we were going to put up our Christmas decorations. We made it as far as doing a little furniture rearranging before I got crabby because Pat wasn’t being joyful enough and we called it a night.

I know. Why can’t he just be joyful on que? I’ve got it rough don’t I?

Anyway, we tried again tonight. With a little more success. Emphasis on little.

Pat had a great idea for rearranging the furniture to make room for the Christmas tree.  After that was done he climbed into the attic and hauled all the boxes and totes down. And then we proceeded to destroy the house with tinsel, snowman pieces and needles from the tree.

The kids had so much fun putting ornaments on the tree. Angel was content to hand most of them to me. But Caleb is all about doing everything himself and so he had to be lifted up to the very top of the tree to put his ornaments up.   Our tree has a wide variety of ornaments – the kids get one every year and our family gets one every year.  In addition to rearranging the furniture, hauling all the decorations out of the attic and watching us destroy his living room on Monday Night Football night, Pat also ran to the store to get some tree lights and a few extra ornaments because we were running low.

I mean really, what’s not to be joyful about, right?

A few shots of the decorating fun… 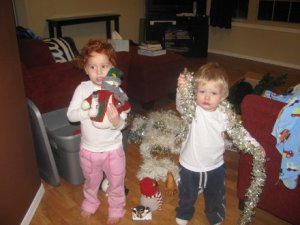 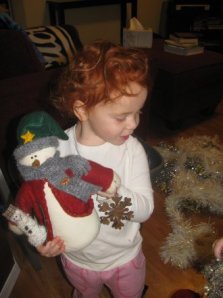 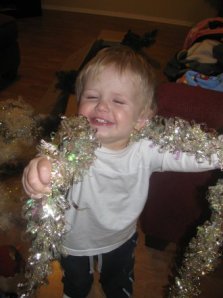 We attempted to take some pictures after the tree was decorated. I thought for a minute about putting the kids in cute little outfits. But let’s just have a dose of reality tonight.

(Hands in the pants. Tummies out.)

(Finger en route to the nose. Caleb finds it amusing.)

Well after that attempt at an it’s a wonderful life moment I took some pictures with the kids. Or attempted.

After that I asked Angel to take a picture with me and Daddy.  And that’s where It’s a Wonderful Life turned into You Better Watch Out (Did you know that was a Christmas movie? I just had to throw that in to see if you were listening.) ….

Caleb starts saying “ME ME ME” which mean he wants to take the picture. I tell him no because he doesn’t know how to use the camera.

He gets mad and starts crying and keeps saying “ME ME ME”.

I tell him no and that Angel is going to take the picture.

Angel falls down and starts crying.

Pat yells at Caleb to go to his room.

Caleb is crying and yells at Daddy “NO”.

Daddy yells at Caleb to go to his room now.

I’m laughing uncontrollably because this is the most fake picture we’ve ever taken.  (And the worst picture. I think I need sleep).

Surprisingly (or not) we didn’t finish our Christmas decorating. We’re going to make another attempt to finish tomorrow night.  But in the meantime we have our Christmas tree decorated and lit up.  Most of my snowman decorations have found their Christmas home. Baby Jesus is on the end table and Angel is so excited to start “playing the game” which also happens to be our Advent Calendar.

And I think I’m looking forward to many more doses of reality this holiday season will bring!

That there’s an RV

The road trip has begun.

Around noon today we drove an hour west to pick up the RV.   But then our crazy trip to Montana was almost averted. Right before we picked up the RV my dad called and said Montana and North Dakota just had a big blizzard and we didn’t know if we could get through to Montana.  After awhile we decided no blizzard is going to keep us from going. So we got the RV rented and traveled another hour west to my parent’s house.

Here’s the kids and I just before we began our trip.  The kids are just a little excited!

The winds were blowing 30-40 miles an hour and we drove through sleet and ice.  That was lots of fun.  Thankfully my husband is amazing and knows how to do anything, including maneuvering an RV through bad weather.

It’s now just after 10 pm and we’re sitting in the RV waiting for my brother to get off work around 11 pm.  We’ll then leave my parent’s and drive at least 3-4 hours before stopping for a little sleep.  We’re hoping to make it to Glendive, MT around noon tomorrow.  Our voyagers include me, Pat, the kids, my mom and dad, sister, one brother and sister-in-law. In case you’re a little slow at math today that’s nine people.  I’m not sure if I’m more nervous about the weather or all of us packed into an RV.

Thankfully we don’t have to worry about what we’re leaving behind. Princess and Prankster are going to take care of the house and doggies while we are gone.  It’s a huge bummer to not be with them or Prince or Pat’s family on Thanksgiving.  But sometimes ya just gotta pack up the family in an RV and head west.

We haven’t seen our family in Montana for 6 years at least. This is my dad’s family and we are so excited to see them and meet alot of baby cousins we haven’t met yet. And of course they get to meet Angel and Caleb.  Please pray them. My relatives, not Angel and Caleb. Well, you can pray for Angel and Caleb too!

As we wait, Pat is watching clips from National Lampoon’s Christmas Vacation. He thinks cousin Eddie is the bomb. Especially his famous line, “That there’s an RV.”

Can’t wait to see what memories are made in that there RV.   Have a wonderful Thanksgiving!

I’ve run out of chalk

I can’t get enough of this song.

I have to repeat it to myself a hundred times a day. Because I believe the lies. That I’m not enough.  That the scars will never be healed. That the problems I create are too big and too small and too outrageous and too silly for Him to even glance my way.  I make it all about me and forget that it’s not anything about me. It’s about Him.

He washes away the writing daily.  But as soon as it dries I’m back writing.  I hate that it’s a daily struggle.  I hate that I become crippled by the fear.  The fear of failure. Rejection. Disappointing others. Disappointing myself.  And yet I’m thankful because it’s in the struggle that He reveals himself. Again and again. It’s in the struggle that He eventually breaks through my pride and stubbornness and brings me to my knees.  Reminding me that I can’t walk this journey alone.

Join me today and believe. You are more. You can be remade.

This entry was posted in Stretching my faith.

If this doesn’t say road trip, I don’t know what does

This entry was posted in Crazy family.