All that is awesome and then some

The kids new favorite word is “awesome”. Everything is awesome to them.  And then when they start to get sad or mad or complain about something we’ve been trying to remind them of all the blessings in our life (all that awesome). Here are a few things that I think are awesome, aka, ways I’ve been blessed beyond measure!

~Angel’s fashion sense. She’s recently taken an interest in picking out her clothes. This was her ensemble a few days ago. Awesome. 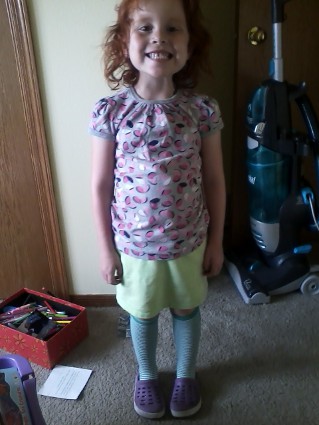 ~That same day we took the kids to Toys R Us to just look around. Talk about torture for the poor kids. But it was actually really fun. I took Angel and Pat took Caleb and we let them take as much time as they wanted going up and down the aisles.

~A few weeks ago we visited The Butterfly House which now has a shark/stingray tank! Honestly it wasn’t as cool as I was expecting – you can only touch what they have in the little tank that floats in the big tank. But the kids thought it was awesome. 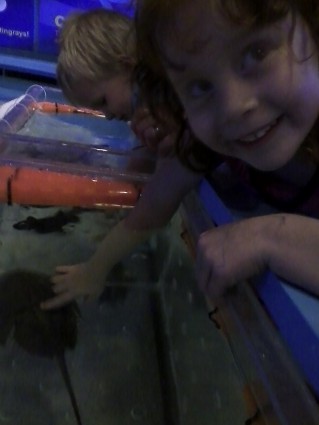 ~My employer was offering tickets to our local baseball team one weekend and so Pat took the kids. I was going to go along but then ditched them at the last-minute. I had some serious browsing I needed to get done. I ended up walking through Big Lots for over two hours. Up and down every single aisle. It was awesome.

Unfortunately my poor husband was plumb wore out when I picked them up. But I did convince them to pose for a picture. Well at least Angel and Daddy did. Caleb was having a meltdown behind the scenes.

Pat said they had an awesome time. At least for the first inning. And then it was 14 trips to the bathroom and “when do we get to go home?” over and over. I think my kids have an awesome daddy! 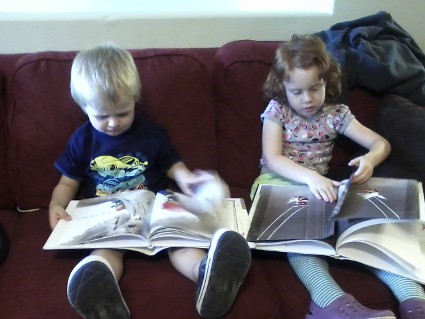 ~The other morning the kids and I made smoothies. We think smoothies are awesome! Our fridge was pretty bare on this particular day and so all we had for our smoothie was cherries, blueberries, spinach, yogurt, ice and a little milk. 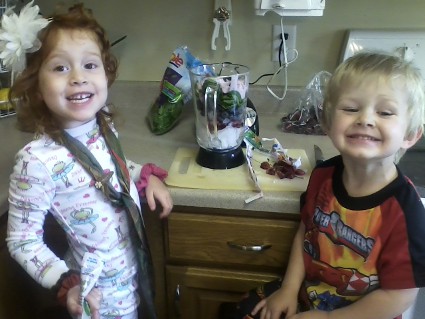 ~Smoothies in fancy glasses are extra awesome!  Although the kids didn’t think it tasted very awesome (even though it did!).

~Awesome is ice cream on a fire truck.  We had stopped for ice cream one night awhile back and as we were leaving the fire truck pulled in and all the firemen piled out! Pat pulled back in to the parking lot and went over. This nice fireman let the kids sit up in the truck! It was awesome!

~Awesome is ice cream in a fire truck!

~Awesome is going to the carnival with Papa, Grama, Princess and Prankster! And of course riding in the helicopter!

~The swords they got for pulling a duck out of the water? Not so awesome. 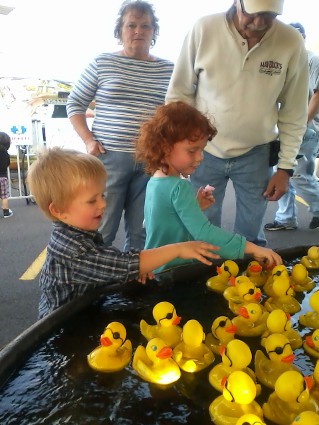 ~Grass! Grass is awesome. This is our new awesome apartment. We’re on the ground level on the end (see the arrow). The kids and I drove by today and we have grass! We’re going to have a pretty large area outside our patio all to ourselves. We think it’s going to be awesome!

~My awesome Angel Cakes – getting her hair and makeup done for her dance recital dress rehearsal. The actual recital is this weekend! 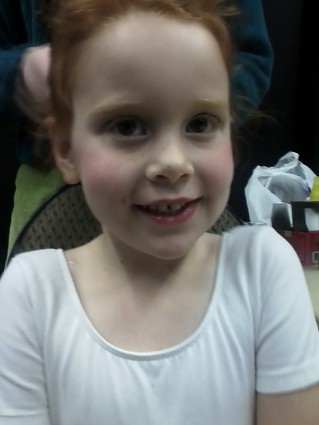 ~Most awesome of all…

This entry was posted in Crazy family, Life or something like it, Making memories.

Where we’ve been and where we’re going

Well hello world. I’ve been a little awol from blogging lately and so I thought I’d drop in and say hi.

A week and a half ago the kids and I visited my parents and my sister was also in town. Since she lives three hours away now we don’t get to see her as much and so it was a blast hanging out with her.

Aunt Nellie is the best “shark” player ever! 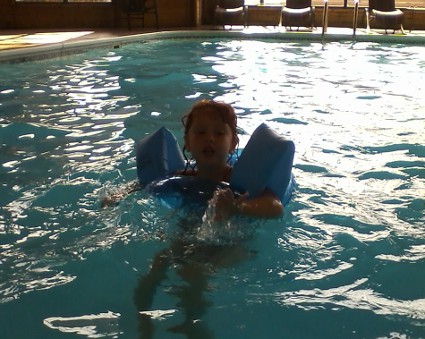 Goggles! (Said in the voice of Russell from the movie Up!) 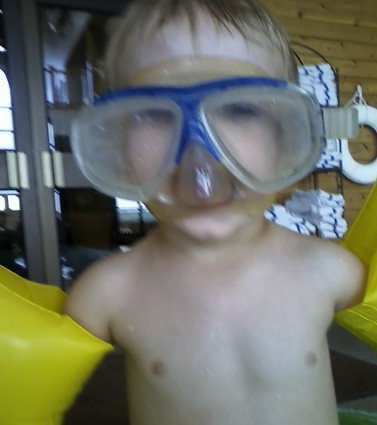 Papa is bound and determined to let the kids have a pet on the boat. Remember the rabbit? Well when we came to visit Papa had acquired a turtle for the kids. His name is George.

We’ve also been visiting the dentist. Which isn’t nearly as fun as visiting Aunt Nellie, Grama and Papa!

It was Caleb’s first real dentist visit. We tried last year but he refused to open his mouth! This time around he was scared at first. Check out the pouty lip!

And what in the world is up with my huge man hands?  Jeez. 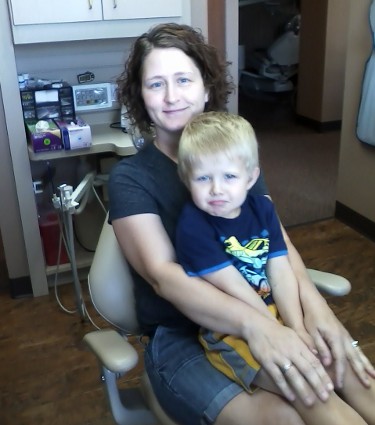 After our great dental assistant (who is also Pat’s cousin so she’s especially great) explained everything to Caleb, he warmed up to the whole thing and wouldn’t stop opening his mouth! It was so sweet.  And he had no cavities! Ya!

Unfortunately Angel didn’t fare so well. She has six cavities! Yikes! Poor thing. And very frustrated mama since we’re pretty strict about brushing teeth. This morning we started working on the filings and they were only able to get one done before she got antsy. So we’ll go again in a few weeks and see how far we get.  Pat and I also have some dental work to get done that we’ve been putting off for over a year now and Pat will need to be put under (anesthesia – just in case you were wondering what I meant) because he kinda freaks out at the dentist.  It’s no wonder we need to move. We can’t afford all these dental bills!

Yes, it’s official. We are selling our house! That’s probably what has been keeping us the busiest the past few weeks. And it’s definitely a bittersweet process. We are pretty sure the bank is going to approve a short sale for us, in fact the process has already been started. We were referred to a realtor who has alot of experience with short sales and so that is reassuring.

Just today we completed our application for our new place. A 2-bedroom, 1-bath apartment! Can you say downsize? We currently live in a 4-bedroom, 3-bath house. We are going to have a sale next week and we’ll store some stuff at my brother’s house and my parent’s house. And honestly it’s actually refreshing to think about how we are going to have to really simplify our life. As long as the short sale goes through within about two or three years we can hopefully get back on track and save up enough to get in to another house – one that we can afford!

Even though we are going to have a very busy next couple of weeks of sorting, throwing, packing, etc, we have alot of other fun stuff planned! My mom bought the kids weekly gymnastic class for the summer and they start that next week! And then every week we have plans to go to story time/puppet show at the library, playtime at the park, swimming of course and lots of other fun things!

We are definitely looking forward to summer and are trusting God for the days to come!

This entry was posted in Angel and Caleb Updates, Life or something like it.

I don’t usually blog on the weekend but I feel compelled to today. I’m sure many of you are enjoying a relaxing, memory-making holiday weekend. I get to work a day shift this weekend and tonight my parents are coming for a visit. The kids (and me and Pat) are looking forward to that!

I just wanted to ask you to pray for some friends of ours who just recently joined our couple’s Bible study group. I know many of you know them, Kelsey and Ryan, and are already praying. But many of you don’t know them and so I just ask that you would pray.

Yesterday Kelsey and Ryan learned that their baby boy Bentley had gone home to be with Jesus. She was just a few weeks away from delivering their precious baby boy.

Kelsey’s mom, Bonnie, is a good friend and mentor to me. She has been for years and has always known exactly what scripture, encouragement and wisdom to share with me.

This morning, by the providence of God, Beth Moore posted about “Throwing Your Burden.”  And so that is my prayer for them. That they could claim Psalm 55:22 during this most difficult time and that they would be able, with God’s strength, to throw this burden.

This entry was posted in Prayer, Stretching my faith.

Question numero uno: I would like to lose the 10 pounds I’ve gained since last Fall, stop drinking pop and stop eating evil no good processed foods. How do you do it? Ya know for more than one day in a row.

Question numero dos: How do you not freak out when not one, but both of your children now go into the bathroom stall by themselves, and explain that they no longer need mama’s assistance. How do you stand there all alone and not cry and not demand that too bad so sad your mama is always always always going to help you go to the bathroom?

Question numero tres: Is it bad to forget to take your meds? (Just kidding.)

Question numero quatro: Why am I writing in Spanglish? (Don’t answer that.)

Question numero cinco and the real reason I’m writing this post: I’m thinking about changing up my schooling plans. Here’s a background in case you aren’t familiar with all the craziness.

I have a Bachelor’s degree in Sociology and this Spring went back to school to get my 2-year nursing degree. The school that offers this degree decided to mess with my life and has now discontinued the program. They still offer their 4-year nursing degree, which I’ve now switched to and I should complete that in about 2025.  Ok, not really, I think it’ll only take me until 2016 or 2017.

The deal is that I’d really like to start working as a nurse before then. There’s another school in town that offers a LPN degree and then after that you can get an RN degree. I have the generals done already and so I think I could get my LPN within a year, year and 1/2 at most. And then  I’d get a part-time job in a clinic and continue with schooling to get my 2-year RN and then online to get my BSN.

So my question? Well, I guess I’m not sure. The insecure me is rearing its ugly head and so I think I just need some validation that this isn’t a ridiculous idea. So let me have it. Be honest. If you say something I don’t like I promise that I’ll take it under consideration.

This entry was posted in Life or something like it.