Yesterday Pat and I took him out to eat lunch and then were gonna go to a movie. But it was too nice out so instead we stopped by his house to help him take the top off his Jeep. 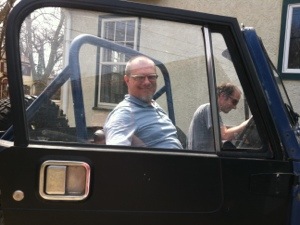 (That used to be Dad’s Jeep. So thankful Tracy has it.)

We are so very thankful for Tracy. And the kids absolutely adore their uncle. Please keep him in your prayers today. As you can imagine birthdays suck this year. 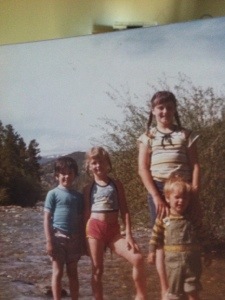 (Us in Florida with “flat Nellie”!)

This entry was posted in Crazy family.

And then we bought a farm

I think I mentioned that we have been looking for a house to buy. We actually are in a two-year waiting period until we can get a mortgage because we had to do a short sale when we sold our house last year.

We’ve looked at a ton of houses. Some just to rent and some that could be contract for deed. But we either didn’t agree on it or neither of us felt peace.

A few weeks ago I put an ad in the classifieds at my work. We got a call about an acreage and they wanted to do contract for deed.

An acreage? We have always dreamed of having an acreage but figured we could never afford it. When they told us what the terms would be we couldn’t believe it. Absolutely perfect for us. And willing to let us pay the down payment over a four month period.

I was sold practically without even looking at it. Ok not really. But almost. Pat however is a city boy born and raised. So he wasn’t so sure.

It’s a little farther out from where we are now than we were looking for. However it’s right off a main road so we clocked it at 20 minutes to get there to Sioux Falls. Not bad.

We went out and looked at it two weeks ago. Oh my word. I was in love. It has a chicken coop people! And 3 bedrooms on one level. And a big kitchen. And a sun room with a hot tub. And a huge garden area already tilled up. And apple and peach trees. And two other out buildings for Pat’s toys and projects. And a chicken coop!!! 🙂

We told the owners we’d think on it and that we did. Unfortunately Pat wasn’t convinced the farm life was the way to go. To put it mildly I was devastated. I thought for sure this was what we were always hoping for and the terms were close to perfect.

But we continued to look at other houses in town. We found a couple different ones we thought were it and then would wake up the next morning with no peace about it.

A week later the owners called and wanted to know what we decided. Pat told them we were still thinking on it.

What!!?? I thought it had been decided so him saying that got my hopes up. But he still wasn’t completely convinced. So once again I tried to shut my mouth-not an easy task-and just prayed that God would give him peace about what we should do.

So a few days ago we were talking about it again. And then Pat told me to call the owner and see if it was even still available. I did call and sure enough they told us they had been holding it for us. I shared some of the concerns Pat had and they told us they would do what they could to make it work for us.

We went out again yesterday to take a look. We really took our time-I think we spent an hour and a half out there. I can’t even begin to tell you the peace that washed over me as I walked through the yard and the out buildings and the house. And to see the kids running and playing and getting crazy dirty! So awesome.

One of Pat’s concerns was that the kids wouldn’t have anyone to play with. Well we met the neighbors, who are actual neighbors right next to the place we were looking at, and they have three kids. Ages 8, 6 and 4. Two girls and one boy. How awesome is that!

Pat talked more with the owner and before we left we had ourselves a farm!

I might have ran threw the big front yard and did a cartwheel. 🙂

We of course need to do some paperwork but the owners already sent us first draft. We’ll just need to review it with a lawyer and then June 1st it’ll become official. We’ll have three years to refinance under our own mortgage but we should be able to do that even before then. And the owners are letting us take possession May 15 so we can take our time getting our stuff moved!

We were really nervous about taking this step but now as it becomes more official we are getting excited! We know it will be an adjustment but I know there will be so much good that outweighs any of the bad.

And I’m sorry but I have to say it. It is so bittersweet not having Mom and Dad here. Oh they would have been so excited for us.

We really appreciate your prayers during the next few weeks. And please pray that this is our very last move ever! I don’t want to move again until The Lord takes me home! The only big expense will be a different vehicle for Pat. His Jeep won’t cut it driving back and forth. So please pray that we would find the perfect vehicle. Pray too for the kids, especially Angel as we transition. They are very excited but still there has been alot of changes this year, but hopefully this will be the perfect change to end this year of struggle.

And if you are looking for something to do on May 18, you are welcome to help us move and come see our new place! 🙂

Updated to add: oops! For those in the area I forgot to say where it’s at. We are about half mile south of Hills MN but we are actually in IA! About 100 yards from the MN border! Never thought I’d be an Iowan! : ) For those not familiar with the area it’s just under 30 miles east of Sioux Falls, but like I said right off a main highway so about 20 minutes. 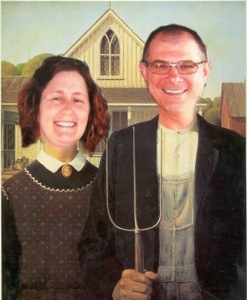 This entry was posted in Crazy family, Life or something like it, Me and him, Stretching my faith.

What we do at Aunt Nellie’s

Well first we drive to Nellie’s of course. 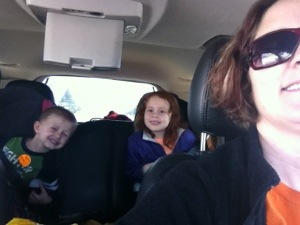 We pick up Nellie and drive to the hotel. We go to the restaurant for supper. Best mac-n-cheese ever!! 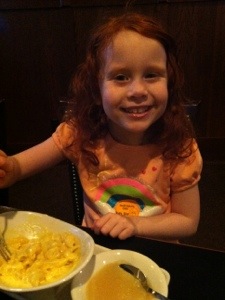 We have dinner with our friends Lisa, Gunner, Oliver and baby Sullivan.

And then after supper we run down the hall to our room. And when I tell Caleb that Oliver is staying over he says, “I can’t believe it. My very first sleepover!” Haha.

We go back to the room, put pj’s on and have a snack! 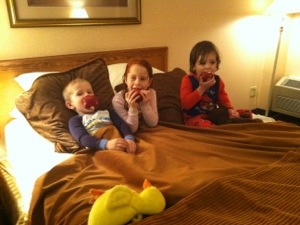 We actually sleep all night. And when I say “we” I mean the kids.

The next morning we are up in a flash, pj’s off and swimsuits on!

We have more swim time! 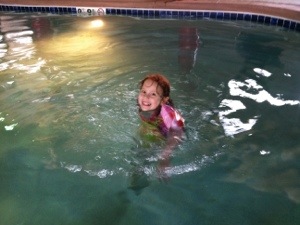 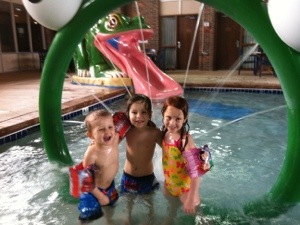 We check out of the hotel and go back to Nellie’s house. We get to see Charlie!

We hang out and then we go get a tattoo. And when I say “we” I mean “Nellie”. 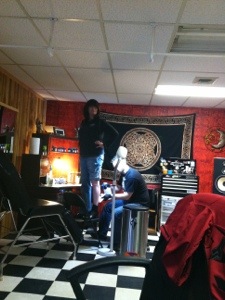 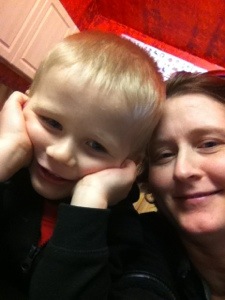 We get bored. So we go to the library.

We go back and pick up Nellie. We see her amazing tattoo. 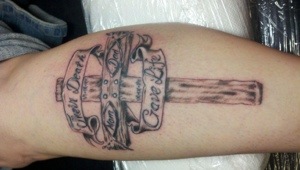 We go back to Nellie’s house. We color our hair. And when I say “we” I mean me.

We sit on Nellie.

We do our nails.

We have awesome fun. We can’t wait to come back!

Romans 14:11
For the Scriptures say, “‘As surely as I live,’ says the Lord,‘every knee will bend to me,and every tongue will confess and give praise to God.’”

This is where I might sound like a crazy person. But it’s not my words that are very clear of what is to come.

The end is near. Is it not evident as you listen to the news and compare it to what scripture says? Jesus will be returning soon to bring His followers home.

Today is the day.

Today is the day of your salvation. There is no more waiting. No more running. No more hiding. Jesus is waiting for you. He loves you. So much that He died for you. Died for your sins. Died so that you could live.

Sunday, April 21 was Mom’s day of salvation. In 1999 she walked in to my church at the time and met with Pastor Bill Kinnan. He was very clear with her.

“Have you ever prayed and asked Jesus to forgive you? Have you asked Him into your heart and life?”

And so Pastor Bill prayed with her and she surrendered. She committed her life and her days to Jesus. She was reborn.

Seems backwards doesn’t it? After Mom was born again you would think it would have gotten easier. But for one, Jesus had alot of healing He needed to do in her life. And second, God never promised it would be easy. In fact He said it would be hard.

But hard is still good when you walk with Jesus.

Healing came. Years of counseling and prayer and daily surrender. Dad was reborn, they were both baptized and they changed. God changed them and Jesus shone brightly through them. And now they are made whole and are spending eternity with Jesus!

Do you have a day of salvation? You might not remember the exact day. And that’s ok.

But I beg of you to not wait. Tomorrow might not come friends. Do not waste another moment.

This entry was posted in Stretching my faith.