See those spots ? That’s blood. And the entire bathroom was covered. Because our dog Max had to go and get in a fight with the neighbor dog and got his ear bit.

Poor me. I was the one who had to clean the bathroom!

2. I realized I take a lot of pictures of Caleb sleeping. 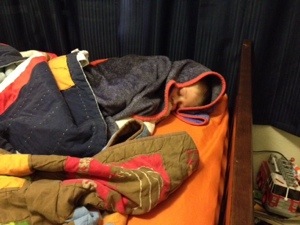 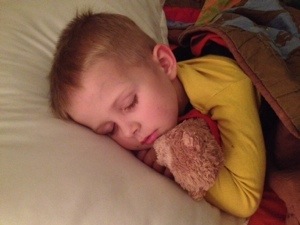 5. A dear friend gifted us with a new (gently used) refrigerator. Ours is very old and ready to completely die any day. Pat picked the new one up tonight and we were all so excited! 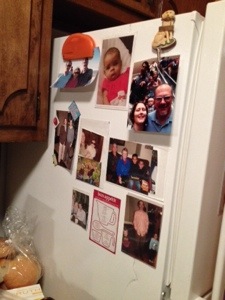 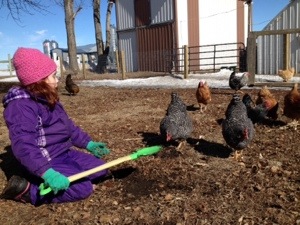 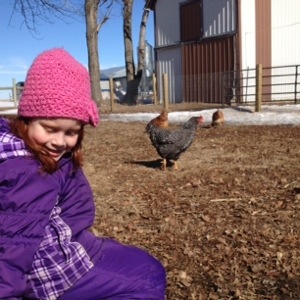 She is such a good helper … Both kids are , they love to come help us clean out the coop. Which comes in handy especially as our chicken flock continues to rise!

8. I was in need of some jeans and so I went to the store and almost bought ONE pair that was on sale for $25. I decided to check Goodwill and I got 3 pairs of jeans, 1 pair of dress pants, 2 shirts and 2 pairs of shoes .

Yes I realize I could have saved $20 and just got the one pair of jeans, but come on, celebrate with me. 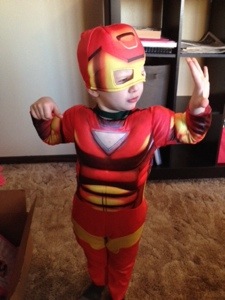 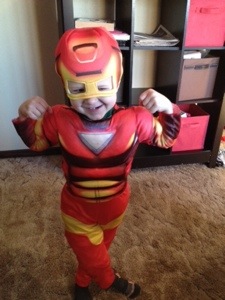 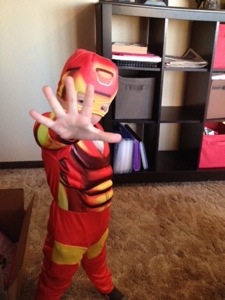 11. Our last roadtrip to Aberdeen. We had an awesome room with bunk beds! And got to spend lots of time with our buds Oli and Sully! 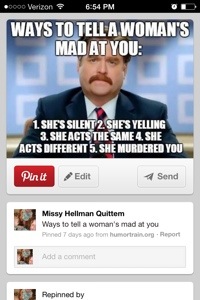 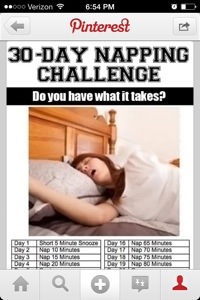 This entry was posted in Angel, Caleb, Farm life, Life or something like it.

Looking through the horrible

It almost feels as if our life started over when Mom and Dad died.
A reset button was pushed, everything changed and all of a sudden our life was so different.

I used to describe it as horrible.

But I think I’m slowly moving past the horrible. Perhaps not moving past it.
I don’t know that I’ll ever be past it this side of heaven.
Perhaps it’s more that I’m looking through it.

Because the horrible does have its purpose.
Without it we wouldn’t be able to look through it and see the good.

When we stood on the banks of the Missouri River on June 12, 2012, looking out at the boat that still held our parent’s lifeless bodies, not in a million years would I have said that any good could have come from their death.

But if we look carefully through the horrible, the good is there.

The good of relationships strengthened and healed.

The good of more cherished time with family and friends.

The good of new relationships with the Lord.

The good of healing from addictions.

The good of God continuing to work through the legacy of Mom and Dad.

All of it, and more, being brought about because of the horrible.

Do you have a horrible that you are facing today?
I think most, if not all of us, can say that we do.

But I also believe that in every horrible we face, God can bring about good.

Good in ways and people and things that we’d least expect.

It doesn’t erase the grief or pain or longing.
It doesn’t even necessarily make the horrible less horrible.

But it does help me focus less on the horrible.

My prayer for you today is that whatever horrible you are facing, that you can look through it and see the good.

And we know that in all things God works for the good of those who love him, who have been called according to his purpose. Romans 8:28

This entry was posted in Mom and Dad, Stretching my faith.

Things to consider before you get a cat

A few months ago we went against our policy of “no cats” and brought home not one, but two cats. Outside cats. OUTSIDE cats.

Except that it was 400 below zero at the time and they were just sweet little fuzz ball kittens and it would have been cruel and unusual punishment to make them stay out in the garage or the shop.

I mean look at them… 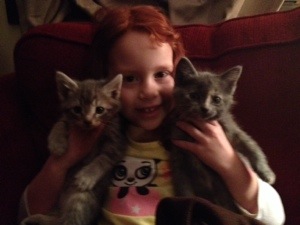 So we decided that Caleb wasn’t THAT allergic to cats and they could stay in the house until it warmed up.

Turns out it’s never going to warm up and Caleb is in fact THAT allergic to cats. Even though he’s adamant that he’s not…

“Mom. I’m not allergic no more,” he says in between sniffles with red watery eyes.

The cats were then confined to our “extra” room. This is a room that was added on to our house and there is no heat in it, but it’s still warmer than being outside. It’s where we put everything we don’t know what to do with and also everything left over from Mom and Dad’s house. That we don’t really know what to do with, but can’t bare to part with yet.

Turns out even that room was too cold for them. I don’t know who decided this. Ok, it was me. I realized one day that we have a perfectly good old basement that doesn’t get used and the cats can be down there where it’s a little warmer.

This is a very long introduction to this blog post. I’ve written all of the above to tell you that as I was shoveling a boat load of cat crap this morning I realized that no one tells you what it’s really like to have a cat.  Sure they tell you that cats have a mind of their own and all that.  But there is SO much more you need to know about having a cat. And so I’m going to do that for you now. This is all hypothetical of course. Since our lovely cats are lovely and spend all their time in the basement.

10 Things to Consider Before you Get a Cat:

1. Cats are not clean. I’m not sure if I was just given wrong information or if I made an assumption about this. I always thought cats were supposed to be super clean.  They are not. They are gross. They step in their crap.

2. Speaking of crap. Cats crap alot. A. LOT. Another assumption or myth or whatever is that cats don’t need taken care of. This is a lie. Cats need more care than dogs. Dogs go outside to do their business. And sure you need to pick it up if you don’t live on a farm [ok, maybe even if you live on a farm] or if you haven’t had 10 feet of snow throughout the winter. But cats? Cats crap alot. In a little box. And if there’s even a little crap in the little box cats don’t like to crap in the little box. And so they will crap other places. So you are forced to clean out the cat crap every single day. And cat crap stinks.

5. Cats do not chase mice. This is another lie that has been told, probably by cats, in an attempt to populate the world with cats. The truth is that cats prefer to sneak out of the basement when their person is carrying a laundry basket, and take naps on small children’s bed. They have no interest in mice. All they care about is sleep.

7. Cats are the most persistent creatures in the entire world.

10. Even after taking into consideration items 1- 9, cats will convince you that they are sweet and lovable and cute, and maybe cats should just be inside cats instead of outside cats and we can just give son Zyrtec every day.

This entry was posted in Crazy family, Life or something like it.

There is more to my life than chickens

You would think from the recent posts on this here blog, that my life revolves around chickens.

Thank you and goodnight.

Just kidding. I’m happy to say there is more to my life than chickens.

There is also the planning and dreaming of when we get more chickens.

No really, I feel bad because I haven’t written much about the kiddos lately. I used to be so good about writing updates on them but since Mom and Dad died I’d rather just spend time with them and hug them, then write about them. And I’m pretty sure that’s ok.

[In all honestly I’m also just plain tired. Which I’ll write about in a little bit.]

Yes. Yes you did read that correctly. Which is another story for another blog post.

Anyway, I came across a gift certificate Mom and Dad had gotten me for Christmas 2011. It was to blurb.com which is a online book creating site. And there’s no expiration date on it. Mom had written a note about being so excited to read my book. I remember she had said now I had to get busy writing it since I had a way to get some copies published.

Talk about voices from heaven. We’ll see if anything comes of that.

It seems that we’ve finally gotten a decent schedule figured out with me working 2 jobs and the kid’s school. It’s still a little bit of running around but my boss at my HR job lets me work off-sight a few days a week so I just work from the church while the kids are at school. It’s such a blessing to have a caring, understanding boss!

The kids get to hang out at Grama’s on Tuesdays and Thursdays after school and then come with me to After School on Mondays, Wednesdays and Fridays. It’s kind of the best of both worlds, which is great. Except that by 5:00 pm on MWF Caleb is SO tired and it’s usually major meltdown especially if he’s playing in the gym and heaven forbid he gets tagged out of the game they are playing.

Speaking of major meltdowns, we are in the throws of strong wills and back-talking with both Angel and Caleb right now.  And I’m exhausted from all these meltdowns I’m having.  And of course the Lord blessed us with two very hyperactive, rambunctious little turkeys. Which I’m SO thankful for and I totally know the blessing that we have been given. But that doesn’t take away from the fact that it’s hard. And 6.75 days out of the week I am so exhausted from picking my battles and correcting and ignoring and scolding and saying, “Please stop fighting,” 1400 times.

We actually thought we were past this current phase with Angel and were praising the Lord we survived. And then like clock-work a few weeks later Caleb turned into this little boy I hardly recognize. Unfortunately it appears that Angel isn’t completely through it, but it’s mostly just dealing with Caleb and his back-talking and not listening and complaining about EVERYTHING.

[The Lord may have just chastised me since I’m, uh, complaining about my kids’ complaining! Sigh.]

Well now you know why I mostly just write about chickens lately. Which I’m sure will continue.

But despite the overwhelmption of it all, it’s these two chickies who truly have my heart! 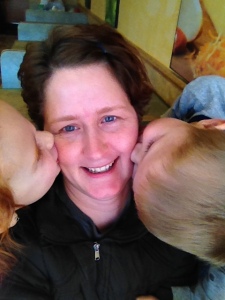 This entry was posted in Angel and Caleb Updates, Life or something like it.